In the history of calligraphy, during the Safavid era and the reign of Shah Abbas I, Alireza Abbasi is considered as a master of “Nastaliq” and “Thuluth” calligraphy, with a lasting contribution in validating the mentioned scripts. He was a student of Mohammad Hossein Tabrizi and Alauddin Tabrizi. At his young ages he moved to Qazvin from his hometown Tabriz and became well accepted at the court of Shah Abbas I, resulting in being given the title of “Abbasi”. 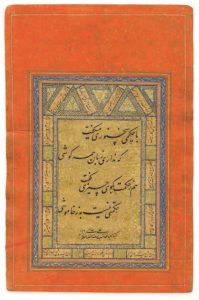